How do we know what is real? What does it really mean to know anything, for that matter?

These were some of the big questions Dr. Esther Meek explored in her lecture “Covenant Epistemology & Recovering Reality” at Southeastern Baptist Theological Seminary on April 21, 2017. The Society for Women in Scholarship and the L. Russ Bush Center for Faith and Culture sponsored the lecture, which served as the inaugural address of the new Evangelical Voices in the Academy Lecture Series at Southeastern.

Meek, a Professor of Philosophy at Geneva College, provided a preview of her forthcoming book, Contact with Reality: Michael Polanyi’s Realism and Why It Matters, which is an expansion of her dissertation. She describes the work as the culmination of a “five-decade quest to deal with two questions from [her] childhood: How do I know that God exists? and How do I know that reality exists outside my mind?”

Meek began her lecture by providing a brief history of Michael Polanyi, an early 20th-century physical chemist, economist and philosopher who formed his epistemology, or theory of knowledge, on the basis of discover instead of mere explanation or justification. Knowing is about contacting reality, and according to Meek,

How do we know that we have made contact with reality? We know because our discovery is accompanied by and therein attested to by a sense of unspecifiable future prospects.

Reality is exciting and full of opportunity. “The real is that which manifests itself indeterminately and inexhaustibly in the future.” Meek terms this idea the “IFM Effect,” and because of the IFM Effect, knowledge becomes a fundamentally creative act. The more you learn something, the bigger it gets.

When we seek God, we find he is seeking us.

Knowledge is not about Mastering Information, but Indwelling Truth

In contrast to modernity, which emphasizes utilitarian mastery over nature and objective facts, Polanyian epistemology argues people cannot articulate all that they know. In other words, people know more than they can put into words. Meek discussed knowing as Subsidiary Focal Integration. She argued, “If you are to contact reality, you must be subsidiarily indwelling its clues.” Expanding upon this idea, Meek illustrated the example of riding a bike. Someone might know the physics of balance, but that will not help him ride the bike without falling off. Riding a bike is something a person knows within his body how to do, but he cannot explain it.

This principle of Subsidiary Focal Integration also presents significant implications for discipleship. Legalism requires following rules for rules’ sake. But when one is obedient, she focuses on God. Scripture indwells her, enabling her to see God and the world and act out of that deeper sense of knowing. Similarly, people rely on models by doing or saying what they do, knowing the act of doing will instill in them the actions they want to emulate. Subsidiary Focal Integration takes away the theory/application dichotomy, because they are related to each other. 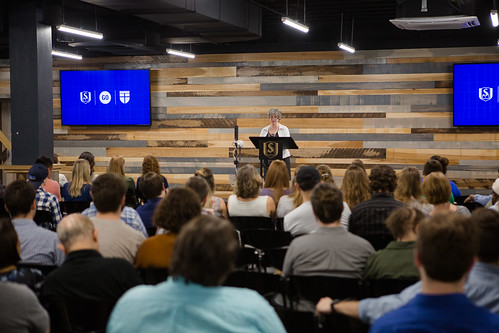 Meek terms her epistemic proposals as Covenant Epistemology, and it is a result of reflection on contact with reality. Meek claimed,

We should take as our paradigm of knowing the interpersonal covenantally-constituted relationship. . . . Covenant Epistemology develops the claim that we should deem not only the knower to be personal but in some sense the known reality to be personal as well.

Knowing is like cultivating an interpersonal relationship with reality. Therefore, as Meek explains,

Knowing is a conversation; we know in order to be known. And according to Meek, the most real person is God. When we seek God, we find he is seeking us. In the same way, when we seek to know anything, because everything that exists is “covenantally charactered,” we can have dynamic communion with the real. As Meek further explained,

You know you’ve made contact with reality when it doesn’t so much answer your questions as explode them, when reality walks in and starts asking you the questions.

You can look into the eyes of reality and find reality staring straight back. The act of coming to know is transformative.

Meek concluded with a discussion of D. C. Schindler’s work in Catholicity of Realism, which fits well within Polanyi’s IFM Effect and Meek’s Covenant Epistemology. Schindler argues reality is ecstatic—it is always out beyond itself. Reality cannot be contained within close examination, and it overwhelms anti-realist skepticism.

Unpacking this idea further, Meek described knowledge as having a two-level structure: near and far. You can see data close up, but you can only make sense of the data by viewing the pattern from afar. An example of this concept is learning to read or speak a foreign language. At first you focus on the sounds of the letters, but with time and experience, you can see the larger pattern and interpret the ideas in the whole words and phrases, which make sense of the smaller letters and sounds. Connecting back to Subsidiary Focal Integration, when you can see the far knowledge, or the pattern, that pattern can indwell you so that you inarticulately knows the pattern within yourself.

Meek’s lecture was challenging and packed with ideas which will simmer in my mind as I wrestle with the concepts of reality and epistemology. This first lecture in the Evangelical Voices in the Academy Lecture Series set a high bar for future engagements.

This year marks the 500th anniversary of the start of the Protestant Reformation. All around the world churches […]

Dru Johnson will discuss "The End of Formation" at the Exploring Personhood conference on Feb. 2-3, 2022.

‘Give Heaven Some Hell’? An Ode to Better Country Music

Rather than “give heaven some hell” with our music, let’s invite a bit of the Kingdom to come on earth as it is in heaven.

Does the Bible actually call us to care for the world around us? Dr. Jonathan Moo joins us to discuss.

16 Books on Faith and Art

Art is far more important to the Christian life than we often believe. Here are some books to help you think more deeply about the intersection of faith and art.

Andy Davis will discuss "The End of Formation" at the Exploring Personhood conference on Feb. 2-3, 2022.